I talked about Zeva and Maestro earlier on.  They pretty much look out for me and all my other friends at the park.  Zeva is a show dog. She’s got lots of ribbons. Mitch says it’s no big deal because everybody gets participant ribbons so losing won’t be a blow to their self-esteem.

My other friends at the Park are Maple, Hunter, Toby and Dodo.  Maple is a big beige Lab who goes around with a giant baseball-size stick in her mouth 24-7.  She gets to go to the park 600 or maybe 6 times a day because her dad had a mid-life crisis and decided he hates working with computers and now wants to catch bad people. I think he will be good at catching crooks because he does alot of push-ups and runs up and down the hills at the park a lot.  Hunter is also a lab but he is jet black. I would die to have his coat. He GLISTENS. His Mom Judy says it’s the food he eats but I don’t know about that. Judy is a veterinarian assistant which is good because Hunter eats just about everything and has to go to the vet alot to have stuff removed from his stomach.  Socks and underwear are his favourite and he’s able to pass these with minimal difficulty. The Christmas ormanent with the battery inside was a different issue. That required a sleepover at the hospital for 21 days or maybe it was 2 days because I am Bark and I am a dog and apparently I have no concept of time. 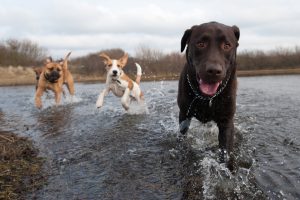 Toby is my best buddy right now. I don’t know what breed he is. He has long hair and really, really big long ears that have streaks of black running through them.  Angelique says he looks a bit like the dog-version of Steven Tyler.  Toby loves to run and he’s pretty fast but he can’t beat me when it comes to doing circle eights or chasing a volleyball. I’m fastest at that.

Dodo is a little white, some kind of “poo”. He moved here from far far away.  Dodo’s dad Dee asked Angelique if Dodo was a good name for him because when he tells people Dodo’s name they laugh at him.  Dodo got away from Dee one night. Angelique found him and he bit her on the leg. She had to go to her vet and get a needle.  So, Dodo is the perfect name for this imperfect pal.

About Bark 12 Articles
Thanks for reading my little views on the world. I have lived a thousand lives, well maybe dog lives, and am happy to share with all of you. Feel free to ask me any questions, especially on fashion. I am always here to help. Enjoy life and stay thirsty my friends.

What if dog’s could play video games? Riley ponders that question and more […]

A big hello from Vancity guys! So, last week, I gave you a bit of an update about my new life here in Vancouver, aka “the best coast”. I told you all about the neighbourhood, […]

Bark’s log, stardate 2016…sorry, just prepping for my binge watching this weekend. I live near a very cool park that is right beside a ravine and high school that has a big running track.  Angelique […]