If you have a smaller dog who needs more entertainment and exercise while indoors, and you don’t want to be stuck repeatedly throwing a ball for hours, then the iFetch is for you. This small, round device lets your dog play fetch on his own! Your dog just has to drop a mini tennis ball into the device, and it launches it for an endless game of fetch. 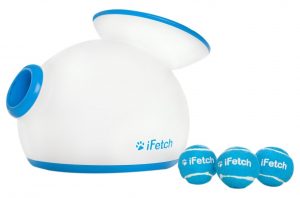 iFetch has three settings for distance — 10, 20 or 30 feet — so it works for any sized room or home. It runs on either battery power or a wall socket so you can place it anywhere.

iFetch powers on any time a ball is dropped into the launcher which lets your dog start up a game of fetch whenever he wants! Some dogs know how to do this without a fancy gadget, but some dogs need an ever-launching friend. If your dog is the latter, then the iFetch sells for $99.

This device is also great for the dog who stays home alone. With the iFetch, your bored pup will be bored no more!

About Treat 64 Articles
Hey, welcome to the Bark 'n Yapp Dog Park. I am the ever loyal and protective Treat! I am always here to throw down the welcome mat as you enter the park, which really means I am the first to sniff your butt. You can also follow me on Instagram @barknyapp and Twitter @barknyapp. I am also taking care of things at "We Love Dog Parks" on Facebook. Wow I am one busy pup!

10 Tips to Prepare Your Home for a New Pup

Bringing Your New Pup Home Building a happy and lasting relationship requires preparation and patience You have now done all your research, found your true match and are ready to bring your new fur-kid home. […]

10 Things To Consider Before Getting a Dog

So, you’re thinking of getting a dog? Good for you, but you need to pump the brakes super chief. Dog ownership is not only about taking care of your friend and going on daily neighborhood […]