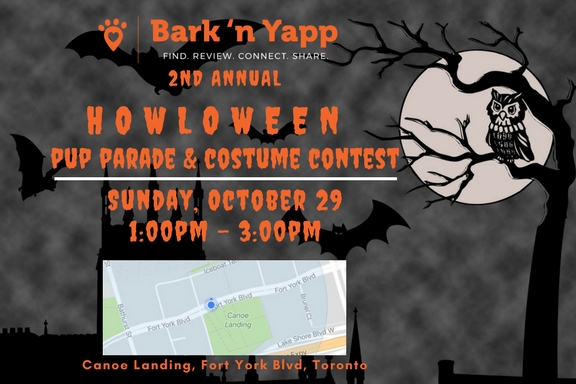 Join 100’s of dogs an dog owners as we parade Fort York Blvd from Spadina to Bathurst. We will be making many stops for both pup and owner treats along the way. This is also a charity event in support of Just Paws Animal Rescue.

This free charity event gives dog owners the chance to dress up their pups and strut their stuff for a chance for some fame and rewards.

We are expecting over 100 participants at the 2nd Annual Bark ‘n Yapp Howloween Pup Parade & Costume Contest, making it the largest event of its kind in Toronto. Plan to join us Sunday, October 29 from 1:00 – 3:00 at this family-friendly and community-friendly party.

Even if you don’t have a dog you are welcome to come and cheer for your favourites. Barkworks – A New Pup Festival in Toronto Hey all my pup friends, I want to introduce you to my new bestie, Arika. Isn’t she just the cutest!!! She’s new to Toronto and we met […]

What’s Up for Pups This Labour Day Weekend

So much pup stuff and so little time Thinking about what to do with your pup this Labour Day weekend? Well, here are Bark ‘n Yapp we have been working our paws off to find […]

A few elves from @secondstbarkery dropped off a fe

It’s a #canadian thing. Have you got your #hallo

Calling all #toronto dogs! #Howloween2019 is back

Don't want to miss what our pups are saying?

Subscribe and join the pack
Woof! Woof!
A big thanks from the Bark 'n Yapp Team